← the true atheist
environmental as anything → 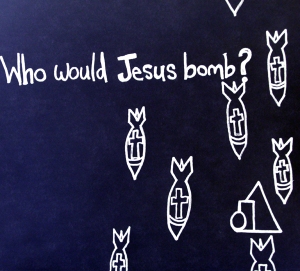 “We should invade their countries, kill their leaders and convert them to Christianity. We weren’t punctilious about locating and punishing only Hitler and his top officers. We carpet-bombed German cities; we killed civilians. That’s war. And this is war.”
– Ann Coulter

“A good butt-whipping and then a prayer is a wonderful remedy.”
– Fob James, Former Governor of Alabama

“AIDS is the wrath of a just God against homosexuals. To oppose it would be like an Israelite jumping in the Red Sea to save one of Pharoah’s chariotters.”
– Jerry Falwell

“There is only one way to get rid of nuclear weapons… use them.”
– Rush Limbaugh

By all accounts, the life of Jesus paints a picture whereby the terms justice and violence fit together about as well as two corner pieces of a puzzle or two pieces of hook velcro. Yet Christians have, throughout history, engaged in horrifically violent activities.

It really does boggle the mind how the life of Jesus can be so ignored by people who claim to follow him. Despite the fact that the Sermon on the Mount is an incredibly non-violent manifesto, many Christians today still insist that violence is the way forward in our world. 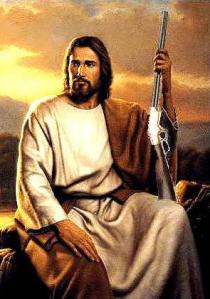 And man said, "Let us make God in our own image."

Many Christians believe that violence is a solution to the Arab-Israeli conflict. For those who hold to a view whereby modern day Israel is “meant” to regain Palestinian territory, violence against the Palestinians is often considered a necessary reality in the eschatological scheme of things. This is even despite the fact that a decent percentage of Palestinians are themselves fellow Christians (and, may I add, Christians who are very confused at the attitudes and actions of their brothers and sisters in some very pro-Israel nations).

But violence is the language of empire – Egypt, Assyria, Babylon, Greece, Rome…

Can there ever be such a thing as “just war”? Just violence? What would Jesus have to say?

The same Jesus who, having had horrible acts of violence and injustice thrust on him, declared forgiveness on his enemies…

Jesus enacts a new way to be human, a way where violent revenge is rejected in favour of forgiveness and willing embrace. What does this mean for international relations in the eyes of Christians? How do we use our vote? How do we advocate – for violence, or against it?

What does it mean for the violence I do against my fellow man? When things are done to me or said about me that are unjust, do I respond with violence (in word or deed), or am I content to forgive as Jesus forgave? Am I willing to go a step further and encourage others to forgive them, as Jesus did?

What does it mean for my opinion of violence, the military, and terrorism?

(And let’s not kid ourselves, we live in nations that cause far more terror for far more people than anything that has flashed on our television screens recently. Tragic terrorist attacks on western nations may have killed several thousand, but the War in Iraq has led to the deaths of over 100,000 Iraqi civilians, and that is without considering military deaths. How can we be the “good guys”?).

There is another way. A Third Way. Not violence. Not apathetic pacifism.

It is the non-violent way of Jesus – Forgiving enemies, not killing them. Standing against evil, not riding with it. Suffering with the downtrodden, not getting your boots dirty. Carrying a cross, not a rifle.

← the true atheist
environmental as anything →